One of the things I wanted to do for Kororaa was make Ubuntu’s Jockey device manager work. This would replace my current dodgy script and provide a mechanism for extending support for other devices over time (if needed). I’ve put my code on github if you want to check it out.

It wasn’t meant to be a joke, but on the 1st April this year I contacted Martin Pitt (the Jockey project lead) to pitch the idea. He helpfully replied saying that they’d written Jockey to be pretty vendor agnostic and that he had already discussed the idea of porting it to Fedora with Jon Masters. Indeed, he had did have the test suite working on Fedora 12 already (using PackageKit).

So I started out trying to understand the code and seeing what was possible. The core of the work is in oslib.py which implements the package management side of things (the default code uses PackageKit). Ubuntu has their own apt implementation, so I wanted to make a native Yum implementation.

There is some detection code (which shouldn’t need to be touched) and then there are the handlers for each device you want to manage (nvidia, etc).

A few weekends ago, Jason Nielsen and I got together to work on the code. In a few hours we had ported oslib.py to Yum, so I think the majority of the work there is done (thanks for your help, Jason!). It’s a much cleaner implementation than running PackageKit and parsing the results, because Yum is written in Python 🙂

That’s where it’s at now. Next I need to create some handlers and then begin some testing. I’m holding off on the next Kororaa release, because I want to get this working before I ship it. Longer-term this naturally won’t go into Fedora, but perhaps into RPMFusion.

Parsidora (another Fedora Remix) has also been working on Jockey, but using the PackageKit implementation (I’ve sent them a message to see if they are interested in the native Yum version). You can try their existing implementation for Fedora 15 if you’re interested.

Hopefully I’ll have everything ready for Kororaa in the next few weeks, before Fedora 16 comes out! 🙂

With Jupiter, we’ve made using your computer extremely easy by including a selection of the best apps designed and programmed by professional artists and developers. We’ve also simplified the whole experience to make things easy and beautiful. 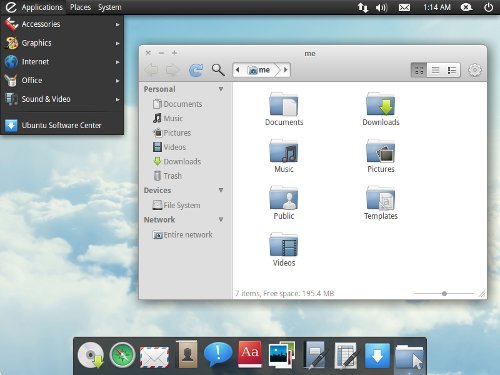 It’s an Ubuntu based distro with Elementary’s cool new apps like Postler, their lightweight mail client. Naturally, it also comes with Elementary’s take on Nautilus and uses the Elementary theme and icon set (just like Kororaa!). It’s light, and it’s fast.

I wrote an article about Elementary for Linux Magazine last year and I’m very proud of Dan and the team for what they have achieved. Dan started using Linux after trying out the original Kororaa Live CD and was amazed by it. So you see, I have a special tie to the project 🙂

Check it out, it’s definitely worthwhile!

Firefox on my Dad’s machine always wants to print to 300 DPI by default. He can manually change it, but it’s annoying. Other browsers pick up the printer default of 600 DPI and are happy, but not Firefox. He posted a bug on Launchpad for it and then afterwards I found a fix for it upstream in Mozilla’s Bugzilla.

It’s as simple as:

As user, open a shell and enter:
lpoptions -o Resolution=600dpi

This will add a default resolution to ~/.cups/lpoptions

So anyone who has the same issue, here’s the work around.

I fix the problems which arise with every Ubuntu release (and in between) for a friend at work whom I’ve put onto Linux. This upgrade to Lucid has meant a number of issues *yawn* but the most annoying was that plugging in his Huawei E220 USB 3G modem was only sometimes detected (every other time it’s just a USB CD and USB memory stick). It was working perfectly on Karmic and on Jaunty (with some hackery) before that.

The solution was rather simple in the end, just load both usbserial and option kernel modules on boot (add to /etc/modules). The kernel will then switch from CD-ROM and detect ttyUSB modem correctly. If you’re having problems with your device not working, try this.

The major derivatives of Ubuntu are well known, but what about the others? Just because they aren’t as popular doesn’t mean they don’t have something to offer! We introduce five of the least known, yet simply outstanding distributions.

While I’m not convinced that Google is our friend, this latest move from Canonical is interesting.

Now, Canonical has struck a revenue deal with Yahoo! and will change the default search engine away from Google (for new installs).

Canonical has negotiated a revenue sharing deal with Yahoo! and this revenue will help Canonical to provide developers and resources to continue the open development of Ubuntu and the Ubuntu Platform.

Yes, Google currently has the largest share of web marketing, but if more and more companies start switching to alternatives like Yahoo! and Bing, then things could change dramatically.

While I’m still up, I might as well tell you about my latest article, “Proprietary Software and Linux: Good, Bad or Somewhere in Between?”.

This comes on the heels of Canonical asking users to vote on which software (such as Adobe Photoshop and Apple’s iTunes) they would like to see made available through Ubuntu.

At work most of our computers run Ubuntu (well, they used to) and the upgrade to Karmic has not been fun. Mike’s machine broke X, Evolution on Justin’s machine segfaults whenever he tried to create a new email and it also booted his old 2.6.28 kernel instead of the new 2.6.31 version. AC’s computer lost all his desktop icons in GNOME, the subtitling editing program he uses broke and needed a re-install, the screensaver also locks up his machine… and so on.

On top of all that, a non-technical user which I put onto Ubuntu tried to upgrade at home and it failed too. Also, my boss tried to upgrade his home computer to Karmic for the second time, but it aborted during the process.

This is all about 6 weeks after the initial release.. *sigh*

The guys over at “Make Use Of” have released a new free PDF book for Ubuntu. After a quick inspection it looks pretty good, with reasonable explanations about components of Linux.

According to Ubuntu X.Org expert Bryce Harrington, the number of X.org related bugs in Karmic “literally went off the chart.”

In my recent article on Ubuntu, I made two suggestions to improve the overall experience of for users.

My main suggestion was to delay update-manager from prompting an upgrade until initial major issues were fixed. I copped a lot of flack (read hate mail) for my suggestions. Personally, I believe that someone had to say it – it’s been the elephant in the room for a long time.

Now however, I feel somewhat vindicated as Bryce agrees with me:

One suggestion that I think might be good would be for releases like Karmic where we feel it is a bit more ambitious technologically, to make update-manager hold off on recommending users upgrade for a few weeks. This would give time for SRUs to make their way through the system for critical issues people run into. In fact, this might even be a good idea for the LTS. Anyway, just wanted to toss out this as an idea. 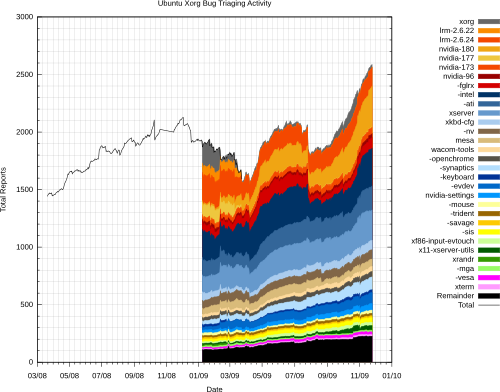