I recently switched my regular Fedora 31 workstation over to the 31 Silverblue release. I’ve played with Project Atomic before and have been meaning to try it out more seriously for a while, but never had the time. Silverblue provided the catalyst to do that.

What this brings to the table is quite amazing and seriously impressive. The base OS is immutable and everyone’s install is identical. This means quality can be improved as there are less combinations and it’s easier to test. Upgrades to the next major version of Fedora are fast and secure. Instead of updating thousands of RPMs in-place, the new image is downloaded and the system reboots into it. As the underlying images don’t change, it also offers full rollback support.

This is similar to how platforms like Chrome OS and Android work, but thanks to ostree it’s now available for Linux desktops! That is pretty neat.

It doesn’t come with a standard package manager like dnf. Instead, any packages or changes you need to perform on the base OS are done using rpm-ostree command, which actually layers them on top.

And while technically you can install anything using rpm-ostree, ideally this should be avoided as much as possible (some low level apps like shells and libvirt may require it, though). Flatpak apps and containers are the standard way to consume packages. As these are kept separate from the base OS, it also helps improve stability and reliability.

END_OF_DOCUMENT_TOKEN_TO_BE_REPLACED 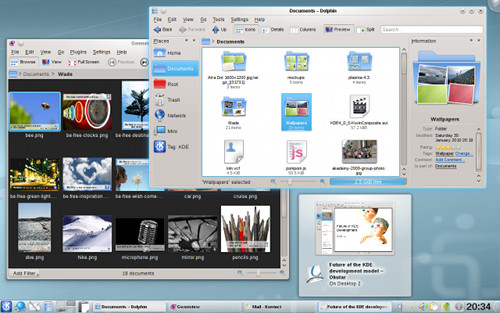 I missed this previously, but Munich has finally switched over to exclusive use of ODF for documents, and PDF for non-editable documents.

Will we see Jeff’s dream of a 10% desktop market share for GNOME this year?

KDE News provides a first look at Mandriva’s integration of Nepomuk with KDE 4.3 in their recent release.

Nepomuk is a whole new approach to managing information intelligently and the transformation of pure research into useful and robust tools obviously takes time. However, Nepomuk is already working behind the scenes in KDE software in ways you may have used without noticing and some advanced searching features are already available if you know how to use them…

A friendly Nepomuk based search interface is expected to debut with Dolphin in release 4.4 of the KDE Software Compilation and full browsing capabilities based on Nepomuk are aimed for inclusion in 4.5 in the form of faceted browsing.

Ohhh.. this would make a sweet Myth-TV front end, I reckon. Well, it’s make a sweet lots of things. Thoughts?

I’ve just finished my second article for Linux Magazine, on whether KDE 4 is complete enough or not. Feed back welcome.