The Fedora 12 Constantine GNOME Live CD is Mono free, but installing GNOME from the DVD pulls in not only Mono itself, but also support for Windows.Forms (mono-winforms), which is outside the ECMA standard (and not covered under Microsoft’s horribly inadequate Community Promise).

While Constantine no longer includes Tomboy, it does still include F-Spot which is a .NET application.

Mono can be removed and blocked by running the following commands as root:
yum erase -y mono-\*
sed -i '/^\[main\]$/a exclude=mono-\*' /etc/yum.conf

I take back what I said earlier about Fedora protecting our freedom..

Update: Users can, of course, select the “Customize Now” button during installation and remove Mono/F-Spot, etc to ensure it’s not installed in the first place.

With Fedora 12, the .NET note taking program Tomboy has been replaced with C++ note taking clone, Gnote. This means that the default GNOME install is completely Mono free. Thanks for protecting our freedom, Fedora!

The new release of openSUSE ships Mono with Windows.Forms by default. For users who don’t mind Mono but would rather not have Windows.Forms installed, there are other options.

Admittedly this might cause issues with other packages which depend on it, but should work. Installing new applications shouldn’t ask for mono-winforms because it’s generally pulled in by a parent package (like mono-web) which is still installed.

Another option is to remove Mono and all dependencies:
sudo zypper remove mono

And then re-install those Mono applications you want. When the resolver errors, tell Zypper to “break the program by ignoring some of its dependencies”. This way the program should be installed with all Mono related dependencies, but without Windows.Forms.

As far as I know, none of these applications actually require mono-winforms, it’s just a package which is pulled in by default as a part of Mono.

Of course, there are other reasons to not use Mono and I’d recommend removing it altogether 🙂

I was pleased to see (although not too surprised) that the KDE desktop in openSUSE 11.2 does not ship Mono by default.

With GNOME, however it’s a different story. The main .NET applications included with 11.2 include Banshee, Beagle, F-Spot, GNOME Do, Tasque and Tomboy.

Not much of this has changed from the openSUSE 11.1 release, with the exception of GNOME Do which is new.

What is interesting, is that by default openSUSE ships the Mono implementation of Windows.Forms from .NET, which is outside the ECMA standard (and not covered under Microsoft’s horribly inadequate Community Promise).

Furthermore, all of the afore mentioned applications rely on Windows.Forms (package “mono-winforms“) and want to pull it in as a dependency.

At some point, Novell intends to split the Mono package between free and non-free components, but that doesn’t appear to have happened yet.

For users who don’t want Mono and .NET applications on their system, the solution is simple. Firstly, remove Mono and all that depend on it:
chris@wks1004925:~> sudo zypper remove mono

Next, lock Mono so that it can’t be brought back by any application you install in the future:
sudo zypper al *mono*

After a reboot, I had a weird issue where the GNOME Desktop Manager (GDM) didn’t load completely. There was no-where to put my username and the “Restart” and “Shut Down” buttons did nothing. It only happened once I had removed Mono, but it could just be Virtualbox playing up. I’ll investigate further..

I’ve just installed the latest release of openSUSE (version 11.2), which now defaults to the KDE desktop.

I was pleased to see that this does not install Mono by default (mostly thanks to the fact that KDE has so far managed to keep it out).

Nevertheless, users can easily block Mono from being installed at a later point, by using the package manager:
sudo zypper al *mono*

The only issue I have experienced so far, is that the installer has the option to configure NTP and gives the option to sync the time, but there’s no network at that point so it fails. In previous versions I’m pretty sure that then kicked up the network wizard, but it doesn’t with 11.2 (at least, installing from the 64bit DVD that is).

Jeremy Allison has spoken up about Mono, Novell’s implementation of Microsoft’s heavily patented .NET platform. He recommends that it be put into “restricted” repositories until the licensing issues can be sorted out.

But my basic issue with the Microsoft Community Promise is that Miguel doesn’t have to depend on it like everyone else does. Miguel’s employer, Novell, has a patent agreement with Microsoft that exempts Mono users from Microsoft patent aggression, so long as you get Mono from Novell. Miguel takes pains to point this out. This is not a level playing field, or software freedom for all. This is a preferred supplier trying to pretend there is no problem. Sure there isn’t a problem, for them. If it isn’t good enough for Miguel, why is it good enough for other developers?

If .NET is not a risk to free software, then why did Novell get patent cover from Microsoft for their clients?

Had Novell arranged a royalty-free agreement with Microsoft for everyone (and not just their clients) like Andrew Tridgell did for Samba, then Mono would not be a problem.

Of course, once software patents come crumbling down this won’t be an issue at all. Until then it is wise to play safe..

Still aren’t convinced that Mono is a trap which ultimately only benefits Microsoft?

Take a look at this “Highly Confidential” document from Microsoft (from Comes vs Microsoft case) entitled “Effective Evangelism” and decide for yourself. It exposes Microsoft’s game plan for dominating the market with their platforms (which we already know, but some choose to ignore).

Here are a few beauties from the included slide show: 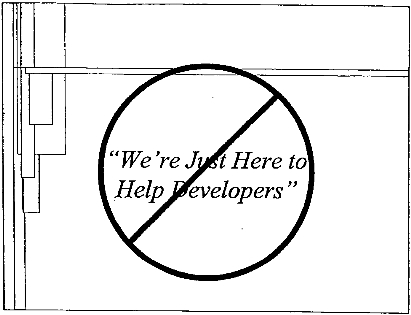 “We Are Here to Help MICROSOFT” 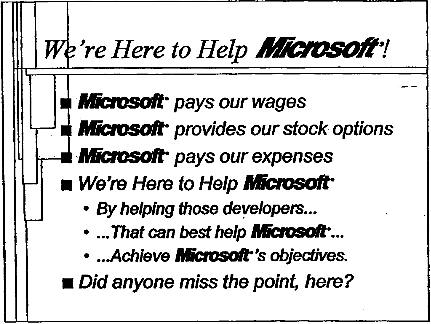 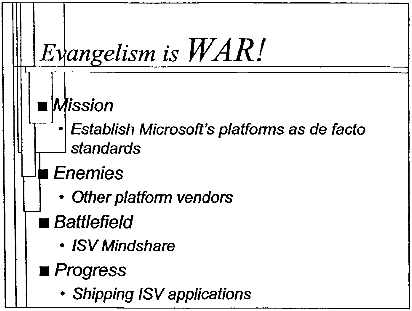 END_OF_DOCUMENT_TOKEN_TO_BE_REPLACED

Being in the spotlight means people often take things you say our of context. I’m speaking of Richard Stallman, who recently got hammered over his “church of emacs” speech and perspective on Mono.

So if you see a discussion of the topic of Mono/ .NET/C#, etc, in which people do not understand the issue properly, please post a correction and cite this article as a link.

If you read that anyone says that RMS “attacked Mono”, please post that he did not attack Mono at all, and ask them to read what he actually said.

There’s enough FUD flying around as it is.

Miguel de lcaza has written on his blog about Microsoft’s announcement to include C# and CLI under their community promise.

The promise itself aside, Miguel has announced something very interesting, Novell will be separating the Mono C# and CLI parts which are covered under the promise from the rest of their .NET implementation which is not.

Astute readers will point out that Mono contains much more than the ECMA standards, and they will be correct.

In the next few months we will be working towards splitting the jumbo Mono source code that includes ECMA + A lot more into two separate source code distributions. One will be ECMA, the other will contain our implementation of ASP.NET, ADO.NET, Winforms and others.

So there you have it. Mono itself does indeed implement more technology than just C# and CLI (we all knew that) and those extras are not covered under this “promise” from Microsoft (obviously). They still pose a significant risk to free software (and so still might C# and CLI, but that for another day).

The good thing about this is that distros (if they aren’t already) can more easily leave out all the extra .NET stuff from their Mono implementations, which is good news.

If you are going to write .NET applications, I think it would be smart to stick to C# and GTK.

This promise from Microsoft vindicates the anti-Mono crowd’s point of view as it shows that there is/was an issue around patents, even for CLI and C#. For this promise, pro-Mono people should be thanking the other side.

Of course, when it comes to the promise itself, I’d like to see the word “irrevocable” put in there somewhere. No doubt over the next few weeks we’ll see people far more intelligent than I doing some analysis on the promise and what it really means for free software.

Peter Galli has written on his blog that he was informed by Scott Guthrie (the Corporate Vice President for the .Net Developer Platform) that Microsoft will include C# and CLI under their “Community Promise“.

It is important to note that, under the Community Promise, anyone can freely implement these specifications with their technology, code, and solutions.

You do not need to sign a license agreement, or otherwise communicate to Microsoft how you will implement the specifications.

Just when (or if) this will happen is not yet clear, nor is whether it will hold any water. Still, it could be the one step to help ease the current patent issues in Mono in relation to C# and CLI (the rest of the Mono implementation of .NET remains under threat however).

Gotta laugh at this from Microsoft’s promise, though:

This promise by Microsoft is not an assurance that either (i) any of Microsoft’s issued patent claims covers a Covered Implementation or are enforceable.

Anyway, interesting to see where this goes.