That’s right. ARM is set to take over the netbook market (yay!) and even more good news that their highly successful Cortex-A9 will get a revamp.

Shrinking the die down to 28-nanometer will provide a 40% performance increase and reduce power consumption by 30%. It should be available later this year. Now that will certainly be something for Intel to think about.. 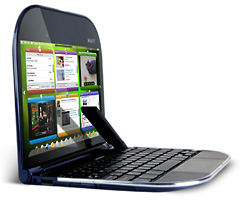 “Skylight is a sleek, stylish 10” mobile HD device with a web-optimized interface that lets you enjoy the web and rich media everywhere you go.

“Skylight is the digital solution for mobile users demanding a no-compromise, full web and media experience in a light, compact device. And since Skylight is equipped with a Qualcomm Snapdragon™ ARM processor, 20GB storage on device with 2GB online, it’s exactly what you need to enjoy the web on the go.”

With the cloud and Web 2.0 stuff rampaging across the Internet, Mobile Internet Devices like this might actually take of this time…

The source code for Chrome (Chromium) OS is out and it hasn’t taken long for support to extend to various devices.

Now, there’s an image that works on the Dell Mini 10v:

Me and some other Dell folks noticed that Engadget recently got the Chrome OS running on a Vostro A860 netbook. I’ve been doing some timkering over the lat few days working to get our Dell Mini 10v up and running with ChromiumOS. As of late yesterday, I can report success.

It shouldn’t be long before various images start popping up all over the place.

I almost didn’t see this, but the Moblin steering committee has just announced the final release of Moblin v2.0, as well as a preview of v2.1.

“Expect to see OSVs and OEMs shipping products based on Moblin v2.0 for netbooks.”

There is even a builder to create your own custom Moblin version.

Also released is a package manager for Moblin:

“You can now browse and easily install new applications on your Moblin based netbook, using the Moblin Garage and Moblin Application Installer.

Things are heating up!

If you’ve been looking for a lean, sleek, well supported operating system for your netbook then look no further. Due out next month, Karmic Koala Netbook Remix has a cleaner interface, complete hardware support and numerous other improvements. Let’s take a look.

Only just noticed that Dell is selling the Latitude 2100 10″ netbook with Ubuntu 9.04 in Australia. None of the Mini series appear to come with the option of Linux, even though my friendly Dell representative told me that they do.

The Linux option is $60 cheaper than Windows XP, however it does not have the option of a built in camera. They both have the option of a touch screen, but the Linux model does not let you change the bezel, which means the configuration is broken. Perhaps this can be resolved on the phone, but the web interface presents a rather limited number of options. That’s disappointing.

Still, if you like Dell and are after an atom based netbook which comes pre-installed with Linux, perhaps the 2100 is for you.

There’s been a lot of talk about Google’s new Linux based operating system for netbooks and desktops, Chrome OS. I thought that I’d talk about it a bit too.

VP of Product Management at Google, Sundar Pichai, has just announced Google Chrome OS, which is slated for release later this year. According to the post, consumer products will be available next year.

The operating system is designed for life on the web and will run a Linux kernel with a new interface, and Chrome of course. The code will be open sourced later this year.

The software architecture is simple — Google Chrome running within a new windowing system on top of a Linux kernel.

This is perhaps yet another nail in the Microsoft coffin.

Google is targeting both Intel and ARM based netbooks with the operating system, but will work on desktop support also.

I mentioned that I thought it would be a great idea to have a cut down, lightweight (if that’s possible) version of KDE4 for netbooks.

I’d really like to build a super light-weight KDE4 desktop without all that extra cruft like akonadi and nepomuk. I think that would be great for a netbook to compete with Windows 7, when it comes out.

Now it looks like the idea is under way, which I think would be really awesome 🙂

I still hold highest hopes for Moblin, which with it’s custom OS and user interface holds a lot of potential out in the market. Time will tell I guess, but I still really like the idea of KDE4 on a netbook 🙂

Mike has a friend with an Acer Aspire One netbook (which he bought over 6 months ago) and it has been no end of trouble getting it to work properly. The main issue has been the horrible built-in Atheros wireless chip. There was much to-ing and fro-ing, the end result of which is that the guy wanted to buy a Windows netbook to replace it (all because of this one main issue). In fact, it’s been down right embarrassing that Linux doesn’t work. He’s wanted to give the rotten thing away, or rather, throw it away (preferably somewhere jagged with lots of rocks).

Eventually we did get it working with Intrepid and even though it was clunkalicious, it did work. Until he did an upgrade that is. So Jaunty comes along and everything is supposed to work out of the box, but it doesn’t. Wireless is still broken. The device is detected, but network manager just won’t work (also iwlist wlan0 scanning does not work).

I dug around on launchpad and found out, lo and behold, there is a bug that stops wireless from working.

The fix? Blacklist the acer_wmi module (add blacklist acer_wmi to /etc/modprobe.d/blacklist) and reboot. Essentially the rfkill switch on the Aspire One is dodgy and it gets permanently set to off. Not loading this module prevents that, which means it’s free to be, well, on.

So, if you have an Acer Aspire One with Jaunty (or other distribution) and you don’t get any wireless love, try this work around. Now I just have to get his dodgy Telstra 3G USB modem device working.. and that’s a whole other level of pain.