Previous versions of Korora have shipped with Ubuntu’s Jockey for installing drivers like NVIDIA and Catalyst but now we have Pharlap. Jockey has been deprecated upstream in favour of ubuntu-drivers-common, so we thought we’d see if we could make some use of that code base and create a version for Korora/Fedora+RPMFusion.

It seemed to work out well and so it’s included by default in the Korora 20 beta release, although Jockey is still available to install if you so desire. It’s much more lightweight and uses yum-daemon for package management. The packages are pharlap and pharlap-modaliases, both of which are available for Fedora 20 from the Korora repo (including source RPMs). 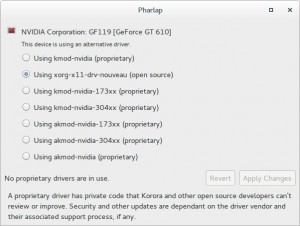 We need lots of testing on Pharlap so if you’re keen to help, we would appreciate any feedback. Hopefully at some point we can get it into RPMFusion.

Where did the name come from? 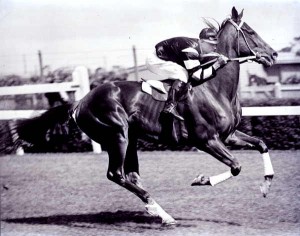 Well since we were replacing Jockey, we thought we’d go with a horse theme. Born in 1926, Phar Lap was a New Zealand foaled, Australian-trained thoroughbred racehorse, one of the greatest of all time. Although Phar Lap came last in his first ever race, towards the end of his career he won 32 of 35 races (coming second in two of the others he lost).

In 1932 Phar Lap raced in the Agua Caliente Handicap at Tijuana, Mexico, which was North America’s then richest race. It was his first time racing in America, his first race on dirt tracks and his first start from barrier stalls. He was last out of the gate and started ten lengths behind the leaders, but by the half-mile he was in front and then won the race by three lengths, setting a new track record.

Two weeks later Phar Lap was dead after someone poisoned him with arsenic.

So to honour this great horse, we’ve named the project Pharlap.