Edit: I made some changes which have dropped the temps to around 40 degrees at idle (haven’t tested at load yet). The case has potential, but I still think it’s slightly too cramped and the airflow is not good enough.

Here’s what I changed: 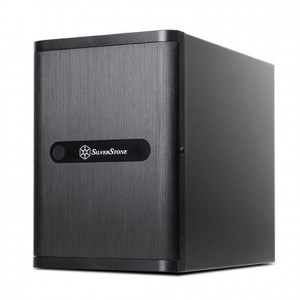 It requires an SFX PSU, but there are some that have enough juice on the 12v rail (although avoid the SilverStone SX500-LG, it’s slightly too long) so that it’s not a major problem (although I would prefer standard ATX).

So I got one to run low-power i3, C226 chipset mainboard and five HGST 3TB NAS drives. Unfortunately the cooling through the drives is pretty much non-existent. The two fans on the side draw air in but blow onto the hotswap chassis and nothing really draws air through it.

As a result, many of the drives run around 65 degrees Celsius at idle (tested overnight) which is already outside of the drives’ recommended temperature range of 0-60 degrees.

I’ve replaced the case with my second choice Fractal Design NODE 304 and the drives at idle all sit at around 35 degrees. 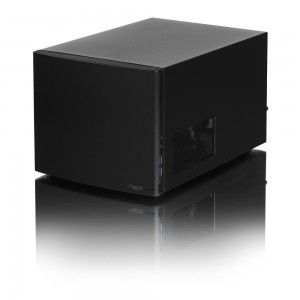 It has two smaller fans at the front to bring air directly over the drives and a larger one at the rear, with a manual L/M/H speed controller for all three on the rear of the case. As a bonus, it uses a standard ATX power supply and has plenty of room for it.

The only downside I’ve found so far is the lack of hot-swap, but my NAS isn’t mission-critical so that’s not a deal breaker for me.

Your mileage might vary, but I won’t buy the DS380 for a NAS again, unless it’s going to run full of SSDs or something (or I heavily mod the case). It’s OK for a small machine though without a bunch of disks (shame!) and that’s what I’ve re-purposed it for now.