Back in 2007 Xandros struck a patent deal with Microsoft, while in June this year they said they were: “kind of getting away from being a Linux company.”

I never actually noticed this before, but Xandros sells patent protection from Microsoft directly to end users who purchase their Debian based GNU/Linux distribution. 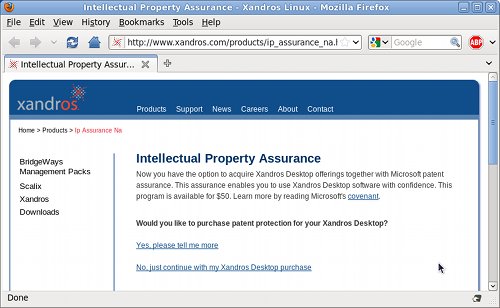 They call it “Intellectual Property Assurance” but I call it a “Protection Racket“:

A protection racket is an extortion scheme whereby a criminal group or individual coerces other less powerful entities to pay protection money which allegedly serves to purchase protection services against various external threats, usually violence or property damage – sometimes perpetrated by the racketeers themselves.

Isn’t that a perfect explanation of what Microsoft’s been doing?