So on another machine (my Dad’s to be exact) after an upgrade to Karmic, both sound and printing were broken.

I fixed the printing issue last night, which was truly strange. The original printer was still there (as I would expect) and could be seen in the GNOME print manager. The problem was that it just wouldn’t print at all. Taking a closer look, for some reason the driver had been reset to “Alps MD-1000” even though it’s a Samsung. 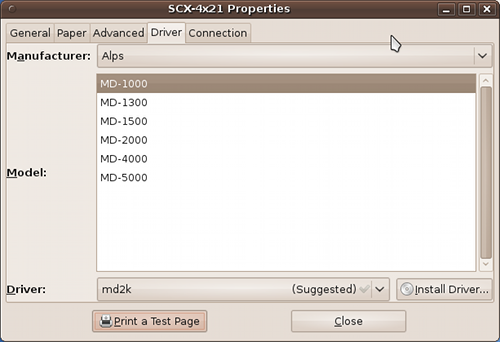 Changing the driver to anything else and saving the changes did not actually change the driver – it went straight back to “Alps MD-1000.” Adding a new printer resulted in the same problem.

The fix was to log into the CUPS server directly (http://localhost:631) and from here I was able to select the right driver – and it stuck. It could now print correctly.

Going back to the GNOME print manager still shows the driver as being the “Alps MD-1000” which is just wrong.

So I’m not sure why GNOME print manager is broken, but if I configure the printer directly with CUPS it works.