WINE (Wine Is Not An Emulator) is an open source implementation of the Windows API which lets you install many Windows applications natively on Linux. After 15 years they just released their first stable release, version 1.0.

Although most linux distros have been using versions just pre-1.0, I thought I’d give it a shot. I added the repository to my sources.lst and installed wine 1.0 on my Debian machine.

Although WINE has their own directx implementation which lets you play many Windows 3D games I thought I’d try with Civilization IV which required a few external dlls. So, after doing a little search I came across a post on how to install Microsoft’s DirectX and replace the one included with WINE.

I followed the howto, including some tips for installing Civ 4 and I have to say it was sweet! I just got a new computer, so it is hard to tell if it’s faster than it used to be under Cedega, but I can say that the game didn’t feel slow at all, even at a late stage in the game with dozens of cities. This was at 1280×1024 with all settings at the highest level. 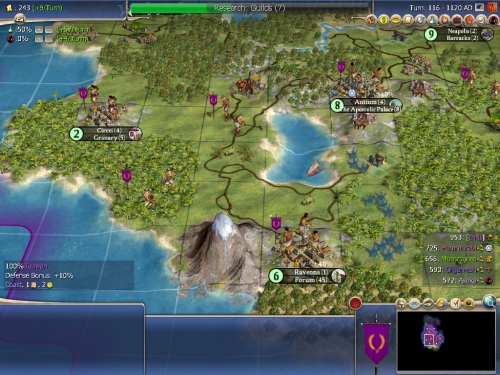 If you’re a Civ 4 fan, give this a shot and let me know how it went for you!