We’re being ripped off over AU$500! That’s more than a second laptop costs in the USA!

Sure, it’s all about the market, but with the strong Aussie dollar it sucks that we cannot get some benefit when it comes to computers!

On the flip side, it stops me from spending money..

I think the upcoming Inspiron Zino HD could make a great MythTV back/frontend.

Coming with Ubuntu, up to 8GB RAM and a 1TB internal drive, the units have AMD processors with AMD graphics. My problem would be the graphics driver – I’ve no idea if the free drivers will support it, but in my experience AMD’s proprietary driver on 64bit machines is absolute rubbish.

Of course, they’re not going to sell it with Linux in Australia, right? *Sigh*

Dell looks to be moving more and more towards Linux for their products with the release of a developer version of Ubuntu Moblin Remix Developer Edition.

Naturally it’s not the final release, things like Bluetooth don’t work, but Dell is hoping the community will pick it up and help to improve the system.

You can purchase the machine with this special developer release from the Dell website, or download the image yourself from the Dell Moblin wiki page.

Only just noticed that Dell is selling the Latitude 2100 10″ netbook with Ubuntu 9.04 in Australia. None of the Mini series appear to come with the option of Linux, even though my friendly Dell representative told me that they do.

The Linux option is $60 cheaper than Windows XP, however it does not have the option of a built in camera. They both have the option of a touch screen, but the Linux model does not let you change the bezel, which means the configuration is broken. Perhaps this can be resolved on the phone, but the web interface presents a rather limited number of options. That’s disappointing.

Still, if you like Dell and are after an atom based netbook which comes pre-installed with Linux, perhaps the 2100 is for you. 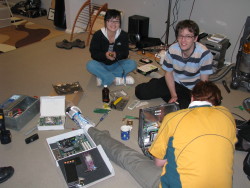 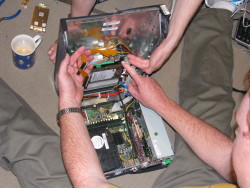