Yeeees.. finally one missing piece of the puzzle to make KDE 4.x a really killer desktop environment is almost complete, KOffice 2.0. It is scheduled for release 27th May (tomorrow where I live).

Years ago I realised that most of the applications I used were GTK based and so made the switch to GNOME. Now that KDE 4.x is really, really good, it’s time for me to switch back for a while.

While I really like OpenOffice.org, I want something more lightweight and KDE-centric. In my opinion, KOffice has been lagging behind for some time (and in many respects, still does), but in a GNOME world I just didn’t need it. Really, all I do need is just a nice little office program to create my data in valid ODF.

Now, with the release of KDE 4.3 just around the corner, it looks to me as though the KDE-only world is almost complete.

So, along with Koffice, we will soon have some other previously missing pieces such as Amarok 2 for music, K3b for burning and Kdenlive for video editing.

Now if only Konqueror was good enough to replace Firefox..

I’ve been using Arch Linux on my desktop at work for a while now and I really, really like it. It’s a bleeding edge, rolling release binary distro that also has a ports style build system for custom packages. Sweet.

I also switched from wmii to KDE 4.1.2 some months back. I’ve been keeping tabs on it for a while because, like many others, I thought 4.0 was a disaster (well, the disaster was that distros packaged it instead of KDE 3.5.x). Anyway, now at version 4.2.2 I have to say KDE is really awesome. I really love the new way of working, the widgets, the look, everything!

Well, not quite everything.. I’d really like to build a super light-weight KDE4 desktop without all that extra cruft like akonadi and nepomuk. I think that would be great for a netbook to compete with Windows 7, when it comes out.

Anyway this post is not about KDE4, it’s about Amarok – probably the best music player there is. For version 2.x they re-wrote it for Qt4. They made some controversial decisions like using embedded MySQL for the database backend, but I’ve no problem with that. Anyway, version 2.0.2 was recently released and it’s great. There is a PKGBUILD for it in the ArchLinux User Repository, but because of the hassles compiling it with needing to link to MySQL client libraries and older libgpod 0.6.0, etc, I built some binary packages for it for i686 and x86_64 architectures. 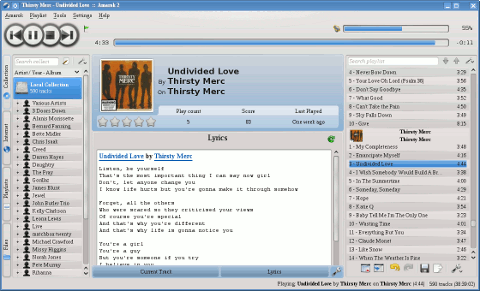